Moritz Greens art works are no longer graffiti, but he found a way to incorporate his graffiti roots with graphic and pop art inspirations into new artistic creations. The new series entitled Chrom-Quadrat will be on view from 29 June to July 4, 2020.

Graffiti is reduced to the essentials. There are no traces of letters and urban aesthetics to be found. In contrary the geometry, straightness and graphic compositions bring a certain beat and structure to his works. The artist adds a spark of space oddity to the mixture. It is a reference to the incomprehensible, infinite and mysterious universe. Because the artist is a fan of old space graphics and NASA patches. Further sources of inspiration flow into his artistic practice, among them: Bauhaus, precisionism and american pop art.

„ My works on canvas often quote elements of graffiti.“

Nevertheless there are some noticeable references to the art of graffiti in Moritz Green’s art works that he rediscovered while creating the Chrom-Quadrat. The artist revisited old footage where he hit on the well known color combination: black and chrome. As it turned out the shiny and silvery chrome shade became the ideal tone to combine with other dazzling colours as well as black and white. Moreover, he reinterprets the fill-ins, which are an extremely important feature in the graffiti tradition. Sometimes the area are filled with polka dots, bubbles, color gradients, straight and curved lines. The appearance of the fill-ins varies from piece to piece, sometimes they appear rather flat and bold and sometimes they even create a depth effect.

Moritz Green’s mixture of his graffiti roots with graphic and fine art is compelling. His artworks still carry the roots of his urban experiences, but they are no longer directly connected to letters. Instead of letters the artist uses linear, hard-edged and precisely painted shapes that are sometimes interrupted by organic and dynamic forms. 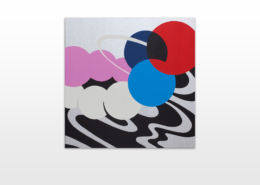 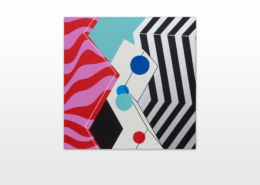 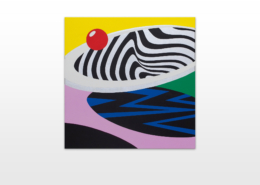 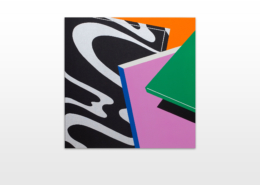 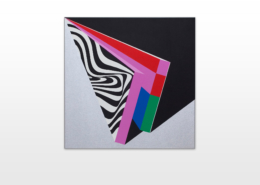 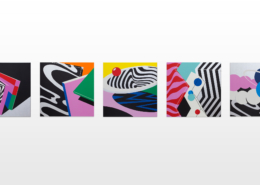