Kolly Gallery is pleased to welcome a new artist on board – Mina Mania! Her latest series entitled Fragments d’une fleur – dédié à Romina will be exhibited at Kolly Gallery from May 3 to May 8, 2021.

Mina Mania’s canvases tell a clear story that depicts a period of evolution and change. Through her iconic female protagonist Nana, Mina Mania tells the story of her friend and muse Romina, to whom she also dedicates the series. Nana lives through the various stages of a separation. Raise the curtain on Fragments d’une fleur – dédié à Romina:

Everything is upside down – the Séparation is now final. The first painting portrays a scattered character with fragmentary parts of a body, as well as other colored forms. The mood is dissolved and stirred up. Nothing has its place anymore, everything is separated from each other. In the second painting, titled Prise de conscience, the figure tries to lift herself up again, in order to get an overview of what she has experienced. Individual parts must now be collected and re-sorted. Despite the events of the past, balance is required. The third painting Équilibrage shows the weighing of individual round as well as angular fragments. The figure slowly finds more peace and returns to herself. A last look back to say goodbye to the past is shown in the fourth painting Adieu au passé. Clear lines as well as strong corners and edges accompany this composition. Finally, the Libération, resolute and clearly oriented. A confident female body, voluptuous and with a bright red lipstick is at the center of the artwork. Focused, purposeful and expressive, the figure turns her head looking into the promising future.

A harmonious piece of art is witness to Mina Mania’s longstanding engagement with image and letter. Image motifs and letters come together complementary, superimposed and juxtaposed, sometimes as an intersection and sometimes a unity. Letters and shapes merge smoothly as well as contrast. They are intertwined in a unique way. Both parts (letter and image) together convey a mood and are used as equal instruments to build the storyline.

„ I love life, the joy and the power that is in everything.“

The same is reflected in the visual language, as well as on the level of the lettering. At the beginning of the series, Mina Mania’s main character Nana is depicted fragmentarily, deformed, more abstract and thrown together. The legibility of Mina Mania’s lettering is accordingly difficult and cryptic. This is compounded by the varied color choices, negative contrasts, and different textures of the individual fields. At the end, the image structure appears resolute and clear. The representation appears more graphic and, due to the clear lines and flat color fields, almost striking. Nana is clearly aligned with regard to the future and takes an unambiguous position, Mina Mania’s lettering also corresponds to this clarity and is therefore well recognizable.

Other details about the Fragments d’une fleur – dédié à Romina series include the character’s head and direction of gaze, as well as hands and gestures. Interestingly, the direction of the gaze of Mina Mania’s main character Nana is to the left in the first four frames, suggesting the direction of gaze for “past” and to the right on the last canvas, suggesting the view into the future and the new chapter in life. Likewise, hand gestures are notable in Mina Mania’s current series. The gestures of Nana’s four-fingered hands are always synchronized with the content of the individual painting and also contribute an essential role on a formal-aesthetic level.

In addition, Mina Mania designs throughout the series only with the primary colors yellow, red and blue. In the background she works with relatively dark tones in the foreground the various shades of the primary colors appeared all the more bright.

Mina Mania’s creative practice is dynamic and flowing. Central to this is the union as well as the juxtaposition of round and angular forms in a harmonious pictorial composition. Thus, she places organic and geometric imagery in a vibrant context. The versatile artist uses numerous techniques, such as painting, drawing and graphics and is characterized by the versatility of textures by acrylic, oil, pastel and water-soluble colors partially flow together. 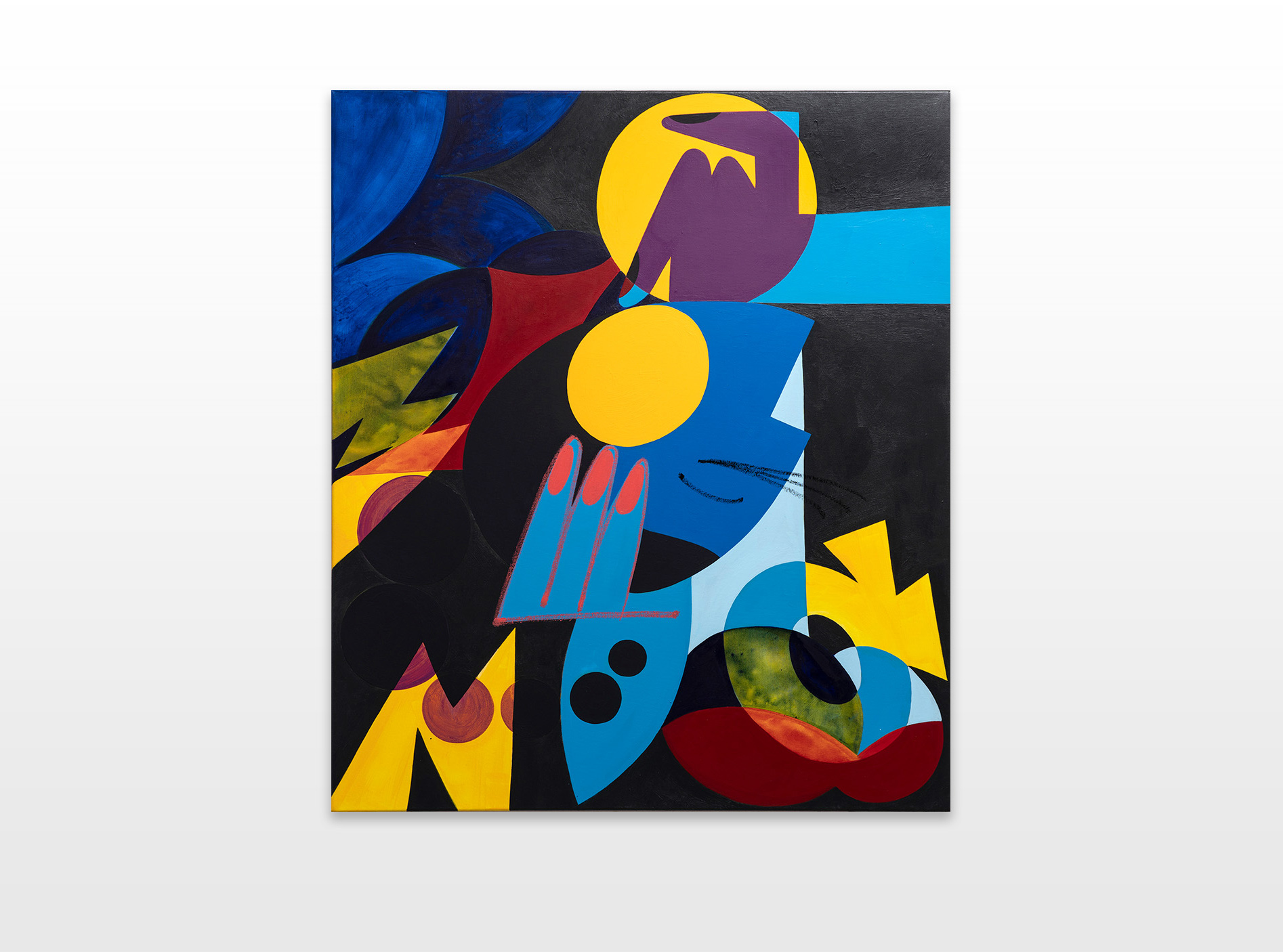 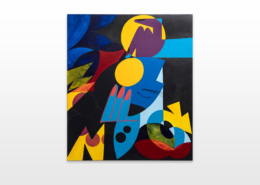 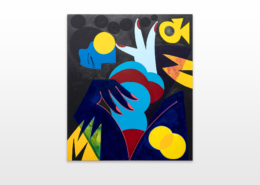 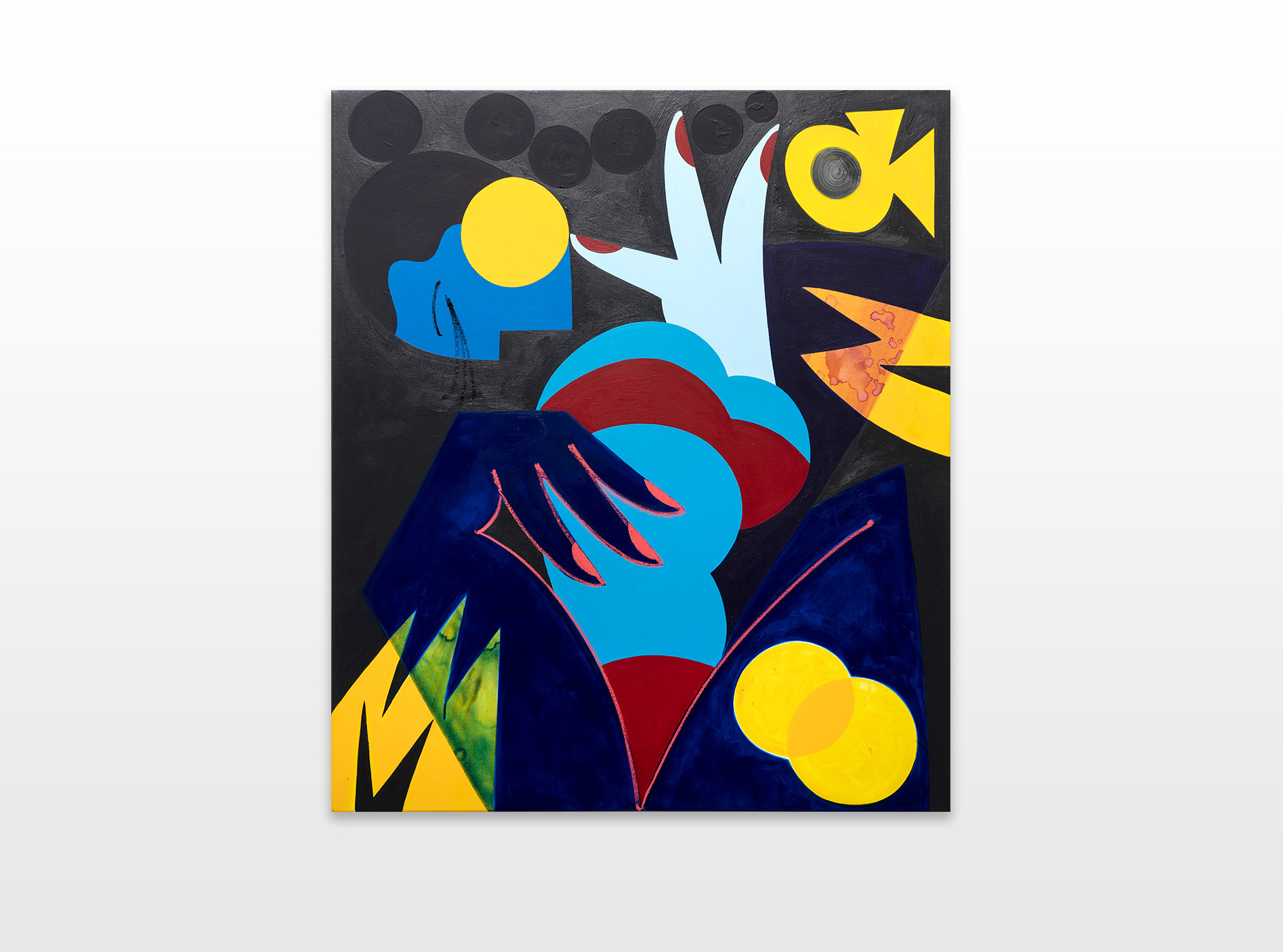 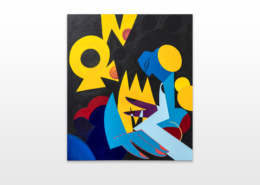 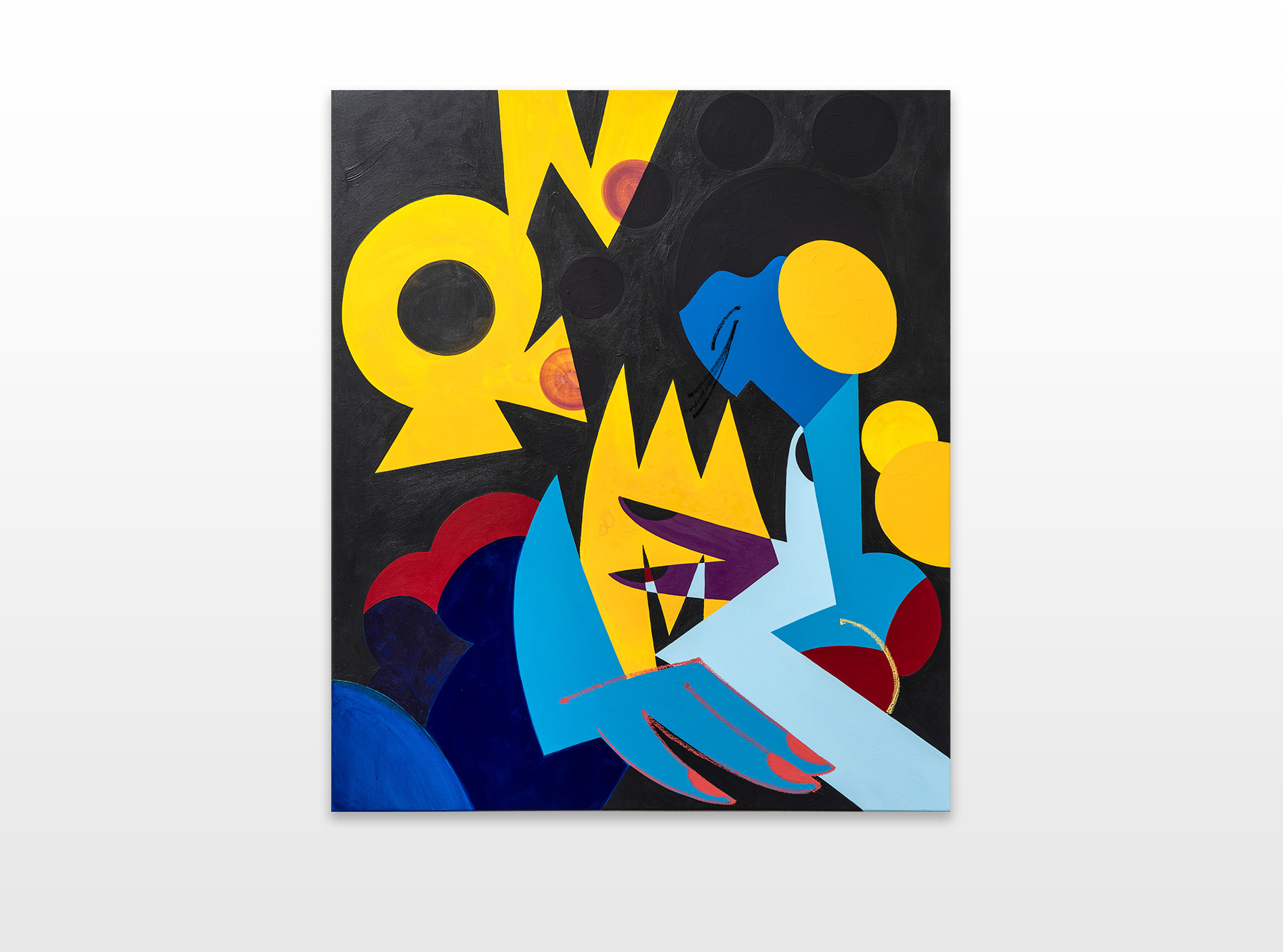 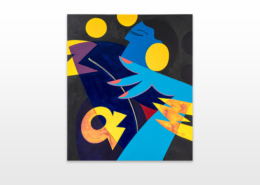 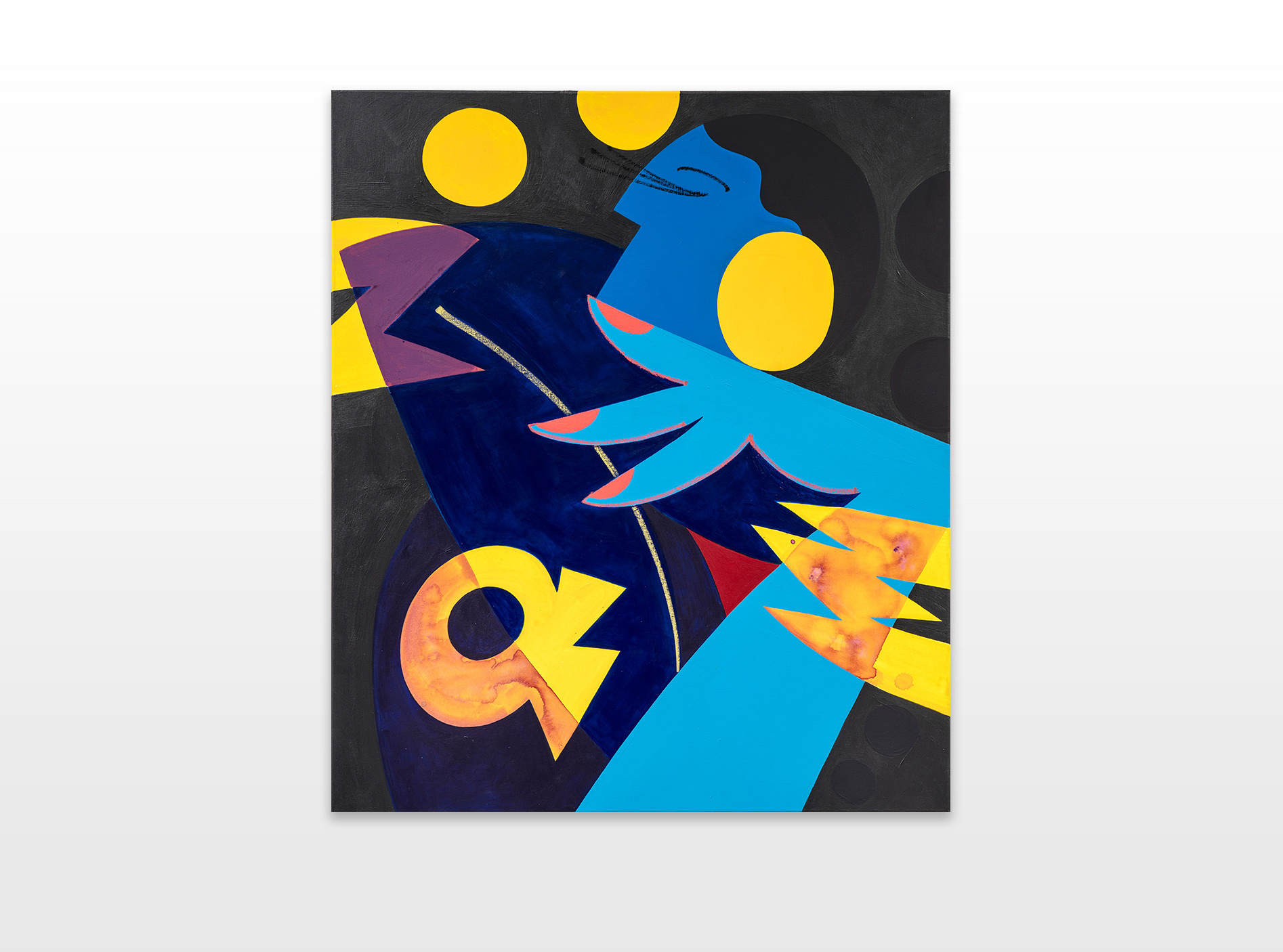 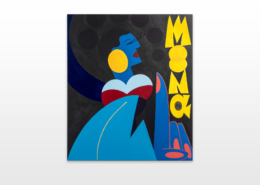 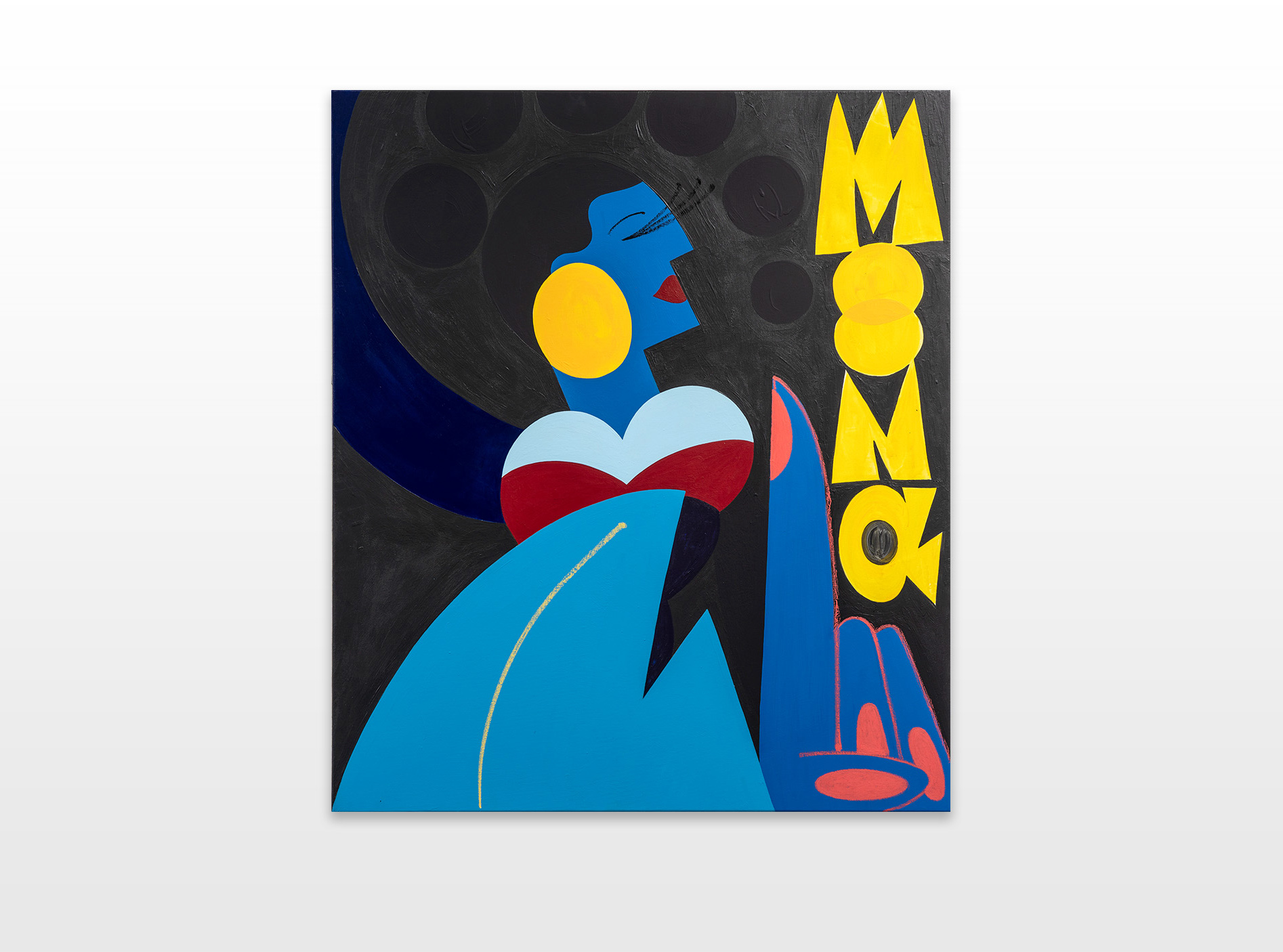 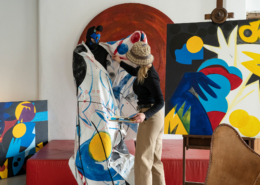 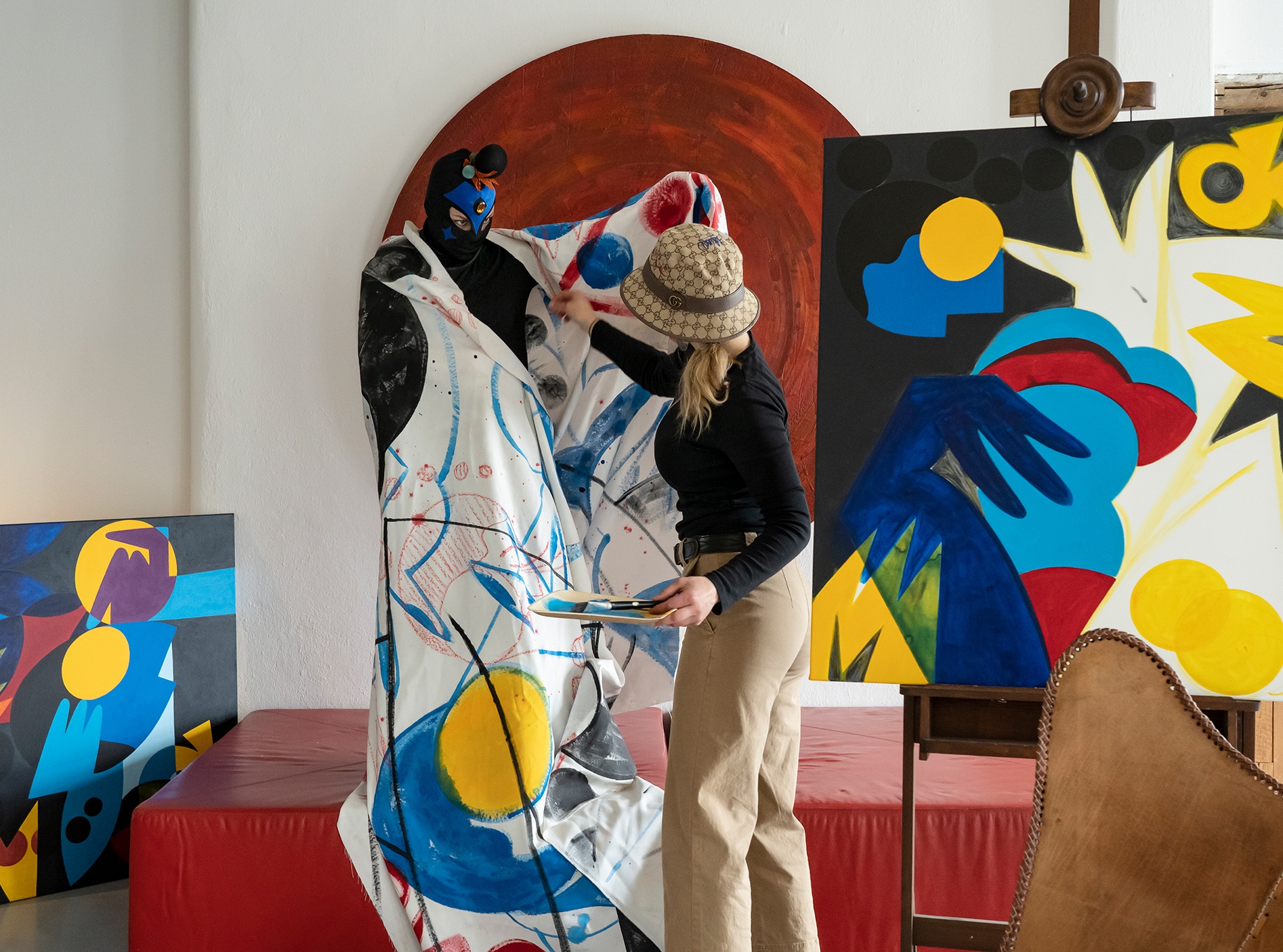 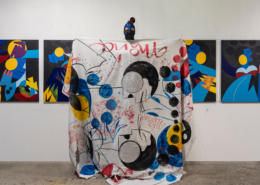 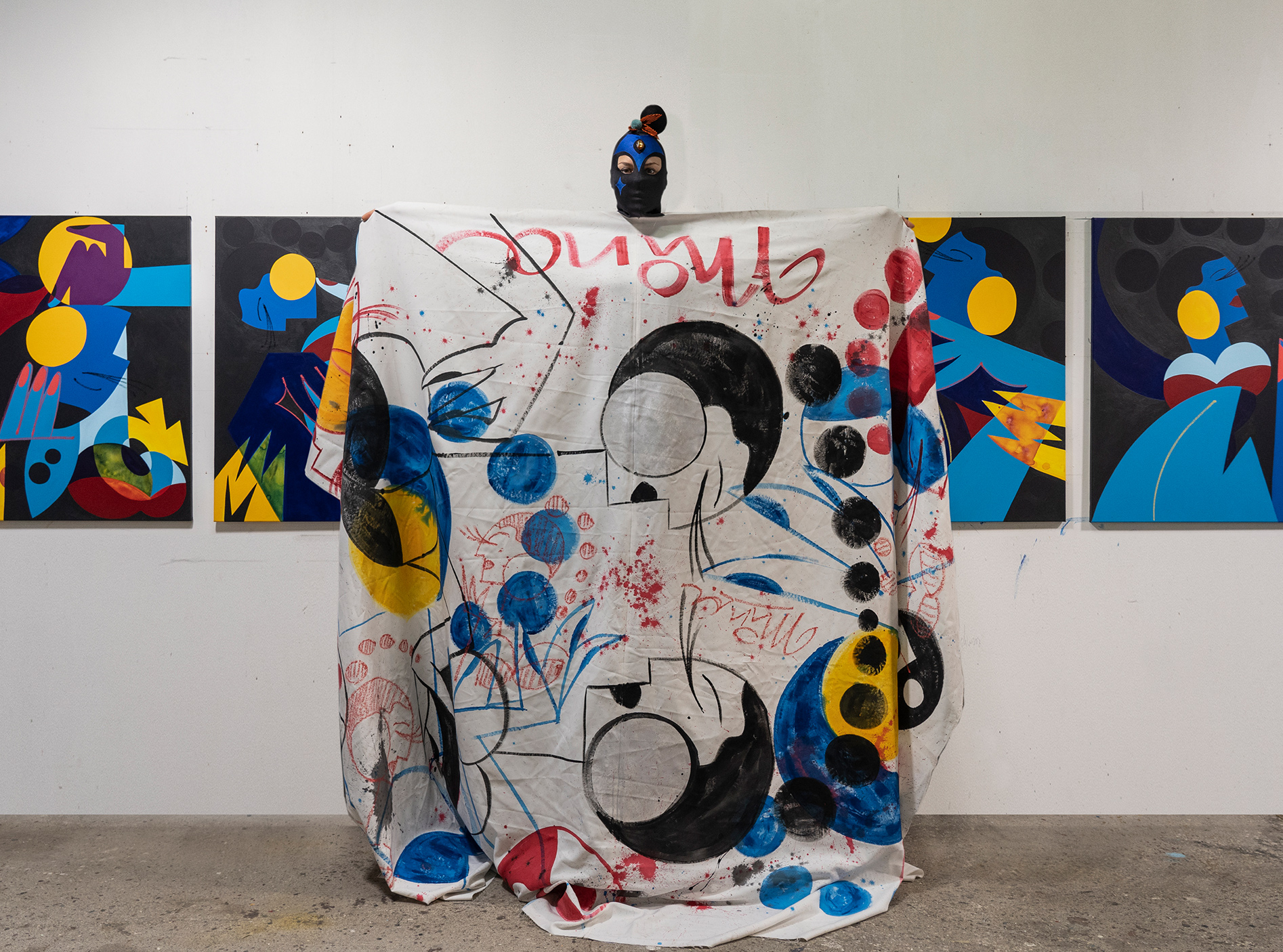 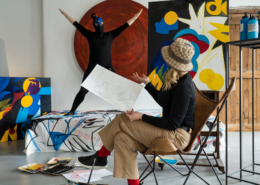 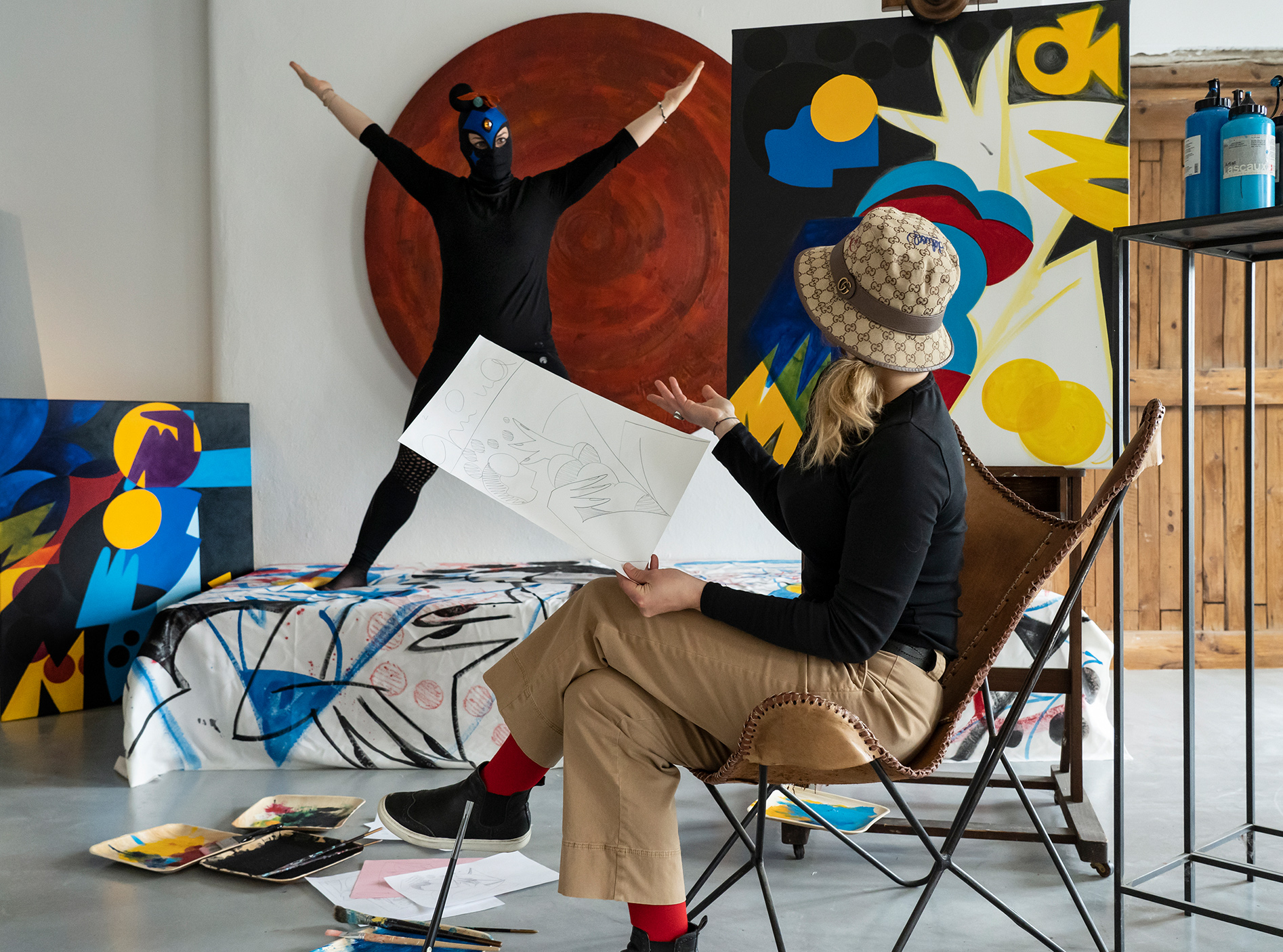 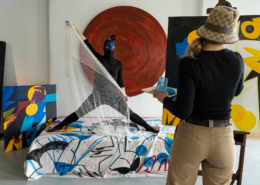 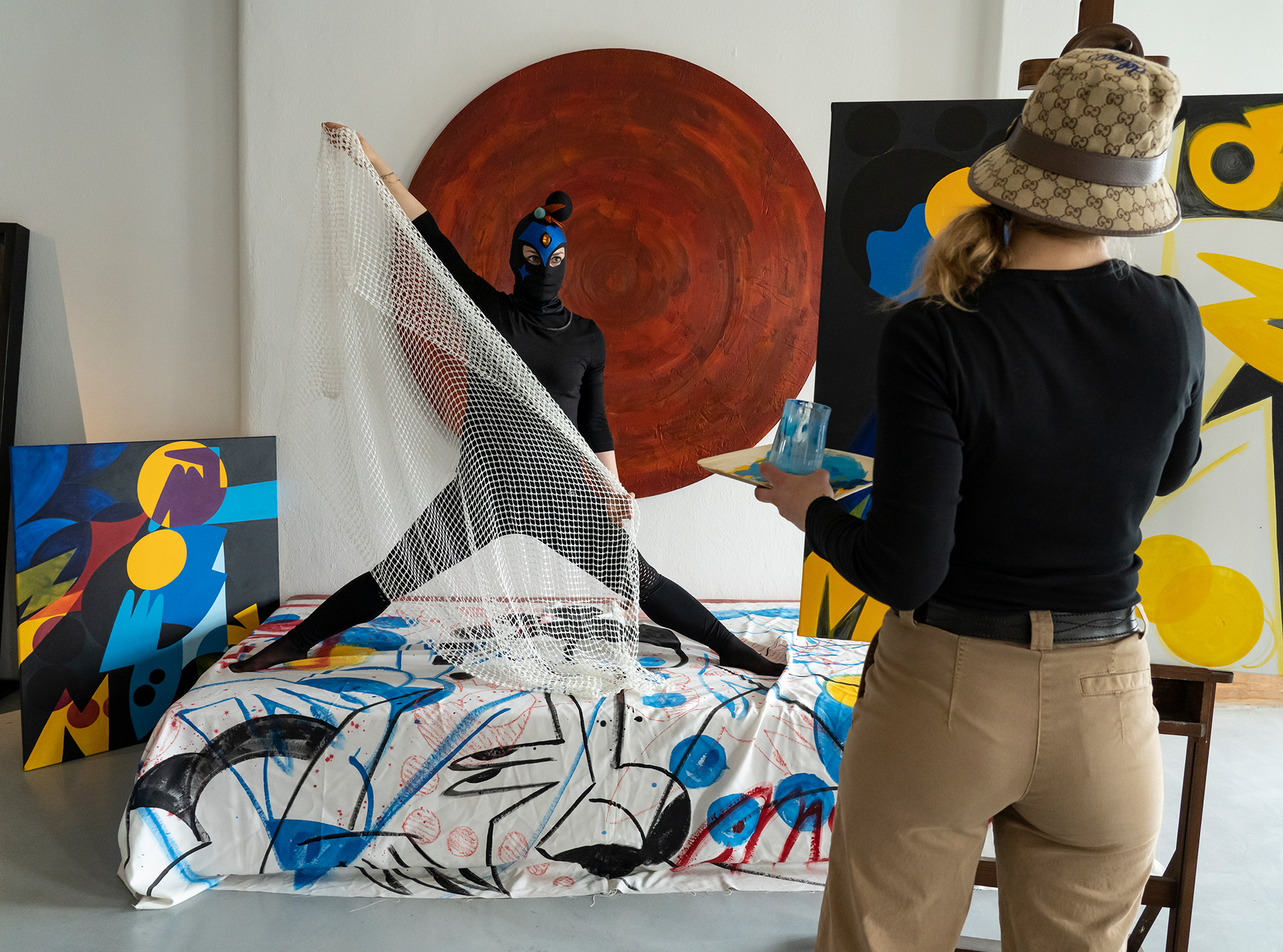 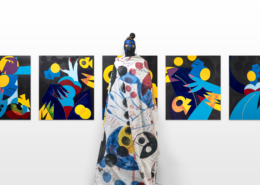 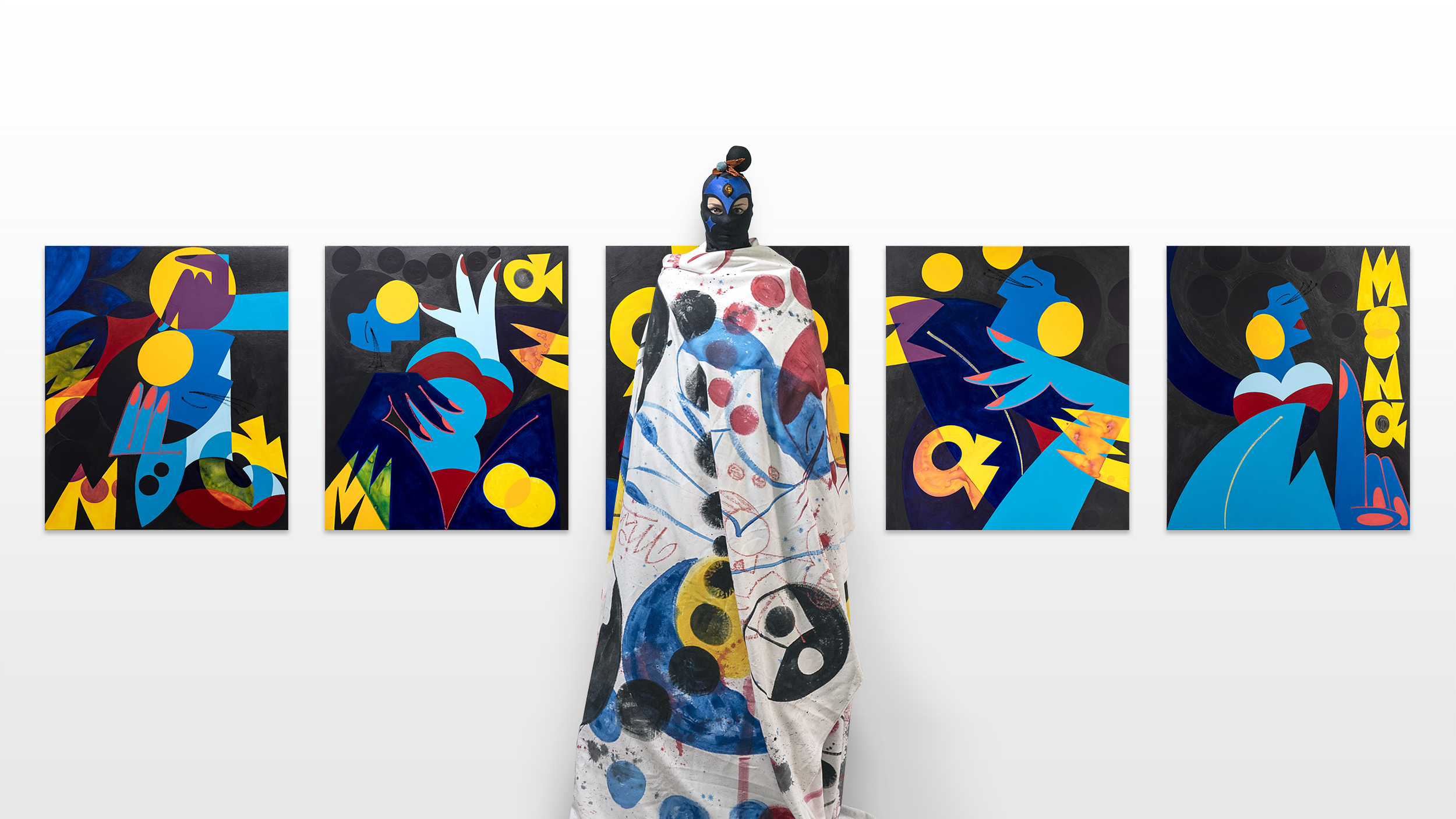 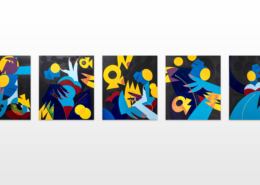 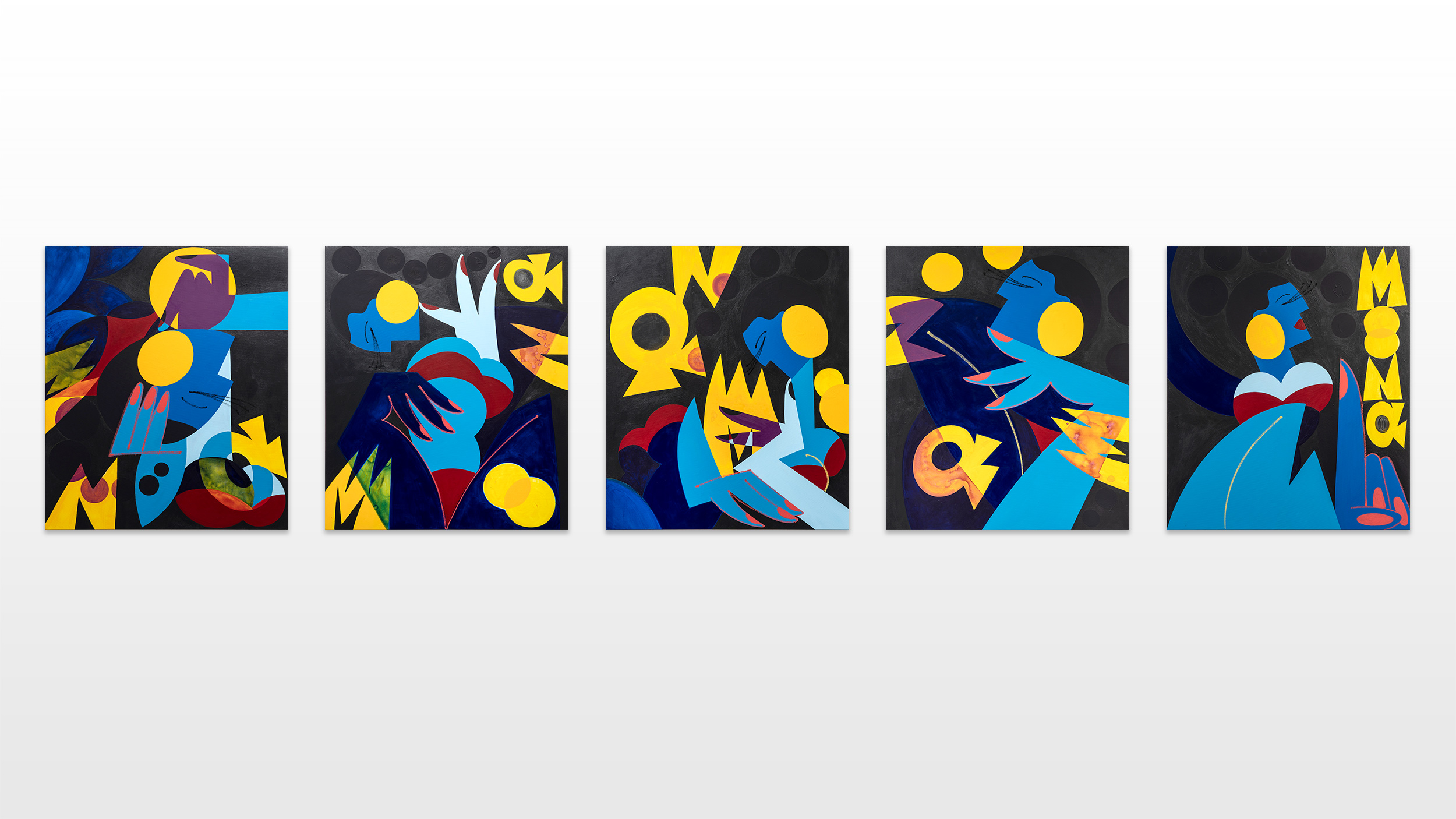